I apologize for my very rudimentary English, I hope the concepts manage to reach the reader intact.

With this first article dedicated to my technique that allows you to achieve long distances on foot with only one outing per week, I want to start going beyond the Italian borders to share this strategy conceived and tested on many athletes in my state since 2006. The very recent one follows. Experience of two athletes that I have had the privilege of preparing.

Now the book "Ultratrail with weeklyMonotraining" is also available in PDF format in an ebook version also in English. 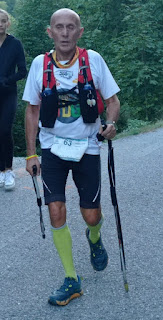 Francesco and Pietro, two athletes I followed this year were able to become FINISHER at the very tough ultratrail race 'The hundred miles of Monviso', just passed. It is not a trivial matter to reach the finish line of a competition dotted with impressive mountain differences in the surroundings of the King of Stone, where you often reach 3000m and reach the bottom after a good 160 km on foot, in a short time! Considering the heat, the fatigue and always the very high percentage of abandonment by many athletes in competitions of this type (in this edition a good third of the starters). For me it was a great satisfaction to see both athletes at the goal and do the en plein with two out of two! All thanks to them and to an incredible will but also to the technique explained in the book 'Ultrail con il Monotraining', which I conceived ...

But we come to the two athletes, given that thanks to a perseverance Pietro Caramia and Francesco Demaria managed to reach an iron and unparalleled determination, they reached the finish line the step after step without paying attention to the fatigue.

Pietro Caramia: Very strong athlete, with uncommon resistence, born in 1977. I remember last year when he came to me in February 2021 to compete at 100 miles in August 2021 with a 'very initial' preparation. Step by step the training had reached an excellent point, thanks to some strategies and tricks, some minor races chosen to complete the preparation and the game was done. That year in just a few months he had managed to be one of the few finishers, against all odds at the very tough edition of 2021, for the first time! Yes, because history repeats itself and Pietro, an ultratrailer, came to me again in September to inform me that he has once again participated in the edition of the 100 mile in 2022. A more gradual preparation this time, based on the one already carried out. It is intended to write that it was of new significance for the second consecutive time, managing the race with an advantage over that of the previous year for 4 hours 30 minutes, finishing 38th overall with 38 hours and 19 minutes of travel.

Francesco Demaria: 65-year-old mature athlete with a lifelong sporting past. He came to me in December 2021, after a hip replacement surgery at the end of September of the same year, with the intention of participating in the 2022 edition of the '100 mile del Monviso'. At first, I was not so convinced that it was wise for him to venture into such an undertaking given his hospital background di lui. However, I strongly believe in destiny and if an opportunity presents itself then there must be a sense... So I decided to help him in the preparation. He was very determined to follow all the indications, the use of sticks first of all and other variables that I do not mention now ... The months have passed in a very 'fluid' way with workouts that progressively increased in kilometers, always using the directives of my method, the weeklyMonotraining. Having reached a certain level, we planned to participate in minor competitive events to be integrated into the training schedule.It was astonishing to look Francesco to always go forward, when other younger athletes and with the 'healthy' they stopped, thanks to a concentration and a determination even out of the ordinary. I add that the biggest alarm for Francesco in the whole preparation period was that of the unexpected Covid 20 days before the race, then fortunately solved magnificently without preventing him from tackling all the 160km and becoming a finisher with 38 hours and 21 minutes at 40th absolute position of the ranking. A real phenomenon!

There were many retirements in this edition of the '100 Mile del Monviso' too but it is normal in competitions with this grandeur, however I am happy that of the two athletes I had the privilege of helping, both have succeeded in this beautiful 'enterprise' that they will surely remember for a lifetime. 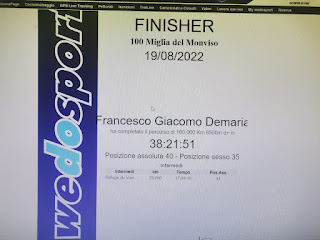 I have to write that it affects me a little no more tell than my participation in competitions but of the people I help in the intent, life is made up of phases and probably this is part of a path within a very specific scheme that does not I still understand well. Even though I have by no means 'retired' from the ultratrail scene, I continue to grind solo businesses that I am very passionate about. I follow my instincts and it is not certain that one day, when I have finished the school of osteopathy (now there is only one more year left), I will return to ultratrail competition. 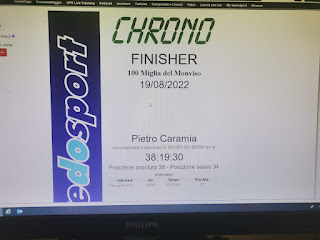 I conclude by adding that the head is everything in this sport, however we must not forget that the body is the necessary tool to reach the goal and must be treated with care in order to be efficient. It is easy to follow champions who never get injured, that any mistake in the training program is 'covered up' by exceptional genetics. It is more difficult to guide people in grandiose enterprises with normal skills, where the subtlety of any advice must be absolute and not made up of exaggerations that lead only to unnecessary injuries and a very short career. 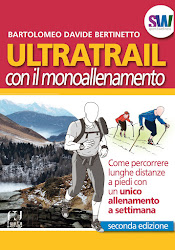